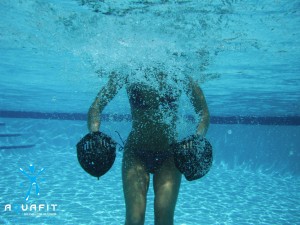 The properties of water, such as buoyancy, hydrostatic pressure, viscosity (resistance), surface tension, and heat dissipation have several advantages over land-based programs.

Buoyancy – any object, wholly or partly immersed in a fluid, is buoyed up by a force equal to the weight of the fluid displaced by the object. In simpler terms, buoyancy lets participants experience a partial floating feeling when they enter the pool.

When a person is in water, the water will naturally want to push the person up (this is particularly valuable for a person who does not want to place their whole body weight on an affected joint or body part). The deeper the person goes in the water, the less weight they will have to support with their own body. The buoyancy of water can reduce the “weight” of a person by about 90 percent depending on body composition, size, muscular structure and depth of water, which reduces stress on joints and connective tissues. For exercisers with lower body or spinal injuries, pregnant exercisers, and participants with physical limitations, the buoyancy of the water is a welcome benefit. The buoyancy also adds a challenge to exercisers to maintain control of their body position while in the water.

Hydrostatic pressure – Hydrostatic pressure is the pressure exerted by water on an object immersed in the water. It is an equal amount of pressure on all surfaces of the object at a given level of immersion. The deeper an object is submerged, the more pressure there is on that object (this property is especially useful for patients who have excessive edema or swelling in certain areas).

Hydrostatic pressure is also beneficial for breathing. The pressure of the water on the chest wall resists muscles that expand the chest for breathing. In this way, these muscles are strengthened and can more efficiently expand the chest to allow a greater volume of air to be inhaled when performing every day tasks on land (for the same reason, it is inadvisable for people with respiratory problems to exercise in the water).

The increased hydrostatic pressure of the water helps to take the lactic acid out of the cells and delivers it to the liver more efficiently, so the exercised muscles do not feel as sore.

Viscosity (resistance) – Viscosity is a type of resistance that occurs between the molecules of a liquid, effecting how a liquid flows. It is the property of water that makes water resistant. It can also be thought of as a measure of a fluid’s resistance to flow. Liquids of high viscosity, such as syrup, flow slowly. Liquids of a low viscosity flow fast, such as mercury. Water is 790 times more viscous, or thicker, than the air we normally walk around in. This allows for a variety of ways to create resistance to an exercise that will not overload muscles or joints involved.

As an exerciser moves through the water, he or she drags along with him/her the water molecules that are not only stuck to his/her body, but also the molecules that are trying to stick to each other. If the surface area of a body part is increased by a piece of equipment, more force is required to move the amount of water in front of it.

Also, if the speed is increased, the force required to perform the exercise is also increased. A good way to measure progress of an exercise is to see how many repetitions of an exercise can be performed in a minute. A greater number of repetitions that can be performed means that greater force is overcome by the muscle. This, in turn, means that the muscle is getting stronger. Also, as the muscle tires, it will automatically slow down, which automatically decreases the amount of force to be overcome. This helps to prevent further injury while performing an exercise.

Another effect of the viscosity of water is the creation of an equal amount of resistance in all planes of motion. When performing an exercise on land to strengthen muscles of the knee, usually only one muscle group can be strengthened at a time with a given exercise due to gravity. Either the muscles that extend the knee are strengthened with an exercise such as the knee extension machine, or the muscles that flex the knee are strengthened, such as occurs on a hamstring curl machine. In the water, because of the viscosity, both of these muscles groups can be worked at the same time with the same amount of resistance with one exercise. This can help to create a better balance between the muscle groups so that one group does not overcome its opposing group.

The properties of viscosity and drag resistance that works so well in a training environment, are a swimmer’s biggest enemy. Swimmers attempt to move as fast as they can through the water with the least resistance possible. Every effort is made to streamline the body and its movement. The goal of aquatics exercise is the opposite. To increase the intensity of the water exercise every effort is made to increase surface space and use non-efficient physical movements. That means using a lot of space and moving a lot of water to create turbulence.

The water offers 12 times the resistance of air. This means that an exerciser will have to apply more force to the water in order to move as opposed to the same movement out of the water. Instead of gravity as resistance, water exercisers have water. The water is a dynamic resistant force, meaning that the more force that is applied in the aquatic environment, the more resistance it will offer. This is a huge benefit that affords many different fitness and skill level participants to exercise together, modifying the movement to meet their individual needs. Also, because of the resistance, movements in the water tend to be slower and more controlled, which lessens the risk of injury. This constant resistance helps to promote muscular balance.

Heat dissipation – this refers to the process of water absorbing the heat generated from exercising bodies. This could be a good or bad thing. On the positive side, as exercise intensity increases so does a student’s core body temperature. This heat is “dissipated” or transferred to the water. This allows the student to maintain a high intensity without the risk of overheating. On the other hand, some students must be very careful about how they regulate their core temperature and may not want the cooling effects of the water.