Home News & Info The Pool as the New Gym

The Pool as the New Gym 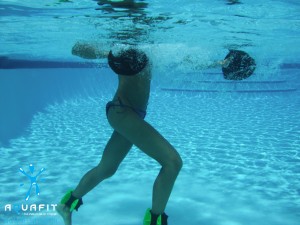 Underwater boxing and cross countries all in one!

Say “water workouts” and this is the image that usually comes to mind: members of an aqua aerobics class, all of them 70-plus, performing mild pec flies, bicep curls and other dumbbell-type movements as they walk leisurely around the pool.

But here, at Frog’s Fitness in Spring Valley, east of San Diego, the students’ hands are enclosed in perforated yellow, red and blue plastic domes. And an hour up Interstate 5 in a pool in Santa Margarita, Troy Polamalu of the Pittsburgh Steelers is gasping for breath as he works out with the same aquatic dumbbells.

Wearing matching strap-on ankle fins, the All-Pro safety with the wild mane of hair and the 2006 Superbowl championship ring thrashes his hands and feet back and forth so fast he appears to be having a seizure. He does hip rotations, hamstring kick-backs, low-ab twists and various upper body exercises, all at a manic pace that bubbles the water like a washing machine. “Faster, faster!” yells his coach.

When the 40-minute workout ends, Polamalu is exhausted but happy. “I love this,” he says. “It’s an extremely tough, high-intensity workout, but not so taxing on your joints. That’s the most important factor — you can fire up the nervous system without getting injured.”

Once limited to senior fitness programs, athlete rehab and mild water running, water workouts are going high-performance. The pool is becoming a fitness factory for all ages and all levels of athletic conditioning, with special high-performance water-workout gear helping to create and accelerate the trend.

In the NFL, HydroWorks pools with built-in treadmills, water jets and TV cameras have become training staples for the Philadelphia Eagles and Green Bay Packers.

“You can increase cardiovascular fitness, running form, balance and even some strength with less normal wear and tear on your joints,” says Eagles head athletic trainer Rick Burkholder. In the elite running world, water workouts made a splash last fall when Kenyan distance star Lornah Kiplagat set the 10-mile world record after spending the seven days before hand running in the pool with AQx aqua running shoes, which have plastic scoops that increase resistance.

Marv Marinovich, the poolside coach barking out orders to Polamalu, says water resistance can improve weight-room style strength and power for any athlete.

Plyometrics are rapid-fire, stop-start, explosive exercises that work on the principle that stretching a muscle right before it contracts fires more bundles of muscle fibers than starting from a stopped position. Plyometrics enhance performance because they build power, which Marinovich describes as “strength-speed” — how quickly force can be applied. The result is instant speed when it’s needed — to hit a tennis ball, to swerve away from an open car door when on a bike, to catch yourself when you trip.

The need for plyometric power and speed turned Marinovich into an instant aqua-convert last summer when he saw the perforated water dumbbells from AquaLogix. The company touts its products’ “omni-directional resistance,” which means that aqua-bells and fins provide resistance from every direction as they are dragged through the water. Unlike regular weights, they work both agonist and antagonist muscles at once, providing resistance to, say, a bicep curl as well as the returning tricep push-down.

The idea of drag resistance isn’t new. Hydro-Tone of Huntington Beach developed the idea two decades ago. A recent University of Hawaii study found that Hydro-Tones’ bulkier, rectangular dumbbells were better for pure strength than AquaLogix, which it favored for more fluid, omni-directional movements. Both types offer a significant benefit vis-à-vis regular weights and land-based plyometrics: They are virtually injury-proof.

“Injuries can be a problem with plyometrics,” says physical therapist Robert Forster, co-author of “The Complete Water Power Workout Book” and director of the Phase IV performance center in Santa Monica. “But doing it in the water eliminates that risk.”

A 2004 study in the Journal of Strength and Conditioning Research found that aquatic plyometrics provided the same performance enhancement benefits as land plyometrics, with significantly less soreness.

Being able to train harder, without injury risk, has yielded positive results for Marinovich’s clients. Former Stanford running back J.R. Lemon, a 23-year-old NFL free agent who did the water workouts last winter, says his “first step” got faster and his vertical jump increased by 4 inches. Polamalu, who has no numbers yet, since he just began the aqua workouts in June, was impressed enough to commit to a twice-a-week schedule. Six-foot-four Northern Oklahoma College basketball guard Nick Kovachevich says he couldn’t dunk regularly until he did four water workouts with Marinovich a year ago but lost his vertical leap when he didn’t continue on his own at school. At the Christmas break, he worked out five days a week and got his dunk back. “Now I’m afraid not to use it,” he says of the AquaLogix workout.

Marinovich’s prized pupil is Dylan Price, a junior at Mater Dei High School in Santa Ana who rehabbed a knee injury earlier this year with three weekly aqua workouts and ran a 4.53-second 40-yard dash in his first summer football practice, compared with a former best of 4.6 seconds. “I’m so fluid and loose now,” Price says. “This is the fastest I’ve ever been — even though I actually haven’t been doing any running.”

During a recent workout, he pulsed his legs and arms back and forth in changing directions so rapidly that it seemed as though he was having spasms. Marinovich calls what Price was doing “bubbling” — a hyperspeed-plyometrics he thinks will prove to be his great new contribution to the science of athletic conditioning. “Bubbling trains the nervous system to send signals to the body to respond faster,” he says. “This is the great overlooked part of training. People don’t recognize the nervous-system stuff yet, but they will. It’s key.”

Bubbling or not, water workouts can be effective. Audrey Adler, a Los Angeles personal training who obtained a set of Aqualogix bells after seeing them at a trade show, has her clients, all middle-aged women with pools, simply mimic standard gym exercises, such as jumping jacks, flies, bicep curls and trunk twists. “It leaves them refreshed but — as they soon discover — worked to the bone,” she says. “They call me two days later and say their muscles still feel it. Every one of them loves the workout.”

As the word gets out, innovations that might have once seemed goofy are becoming cutting-edge.

Tim di Francesco, a physical therapist-trainer in Swampscott, Mass., says he got good results when he set up a hoop over his office’s aqua-tread for his clients who play basketball. “People are getting the message,” he says. “The water is becoming the new gym.”