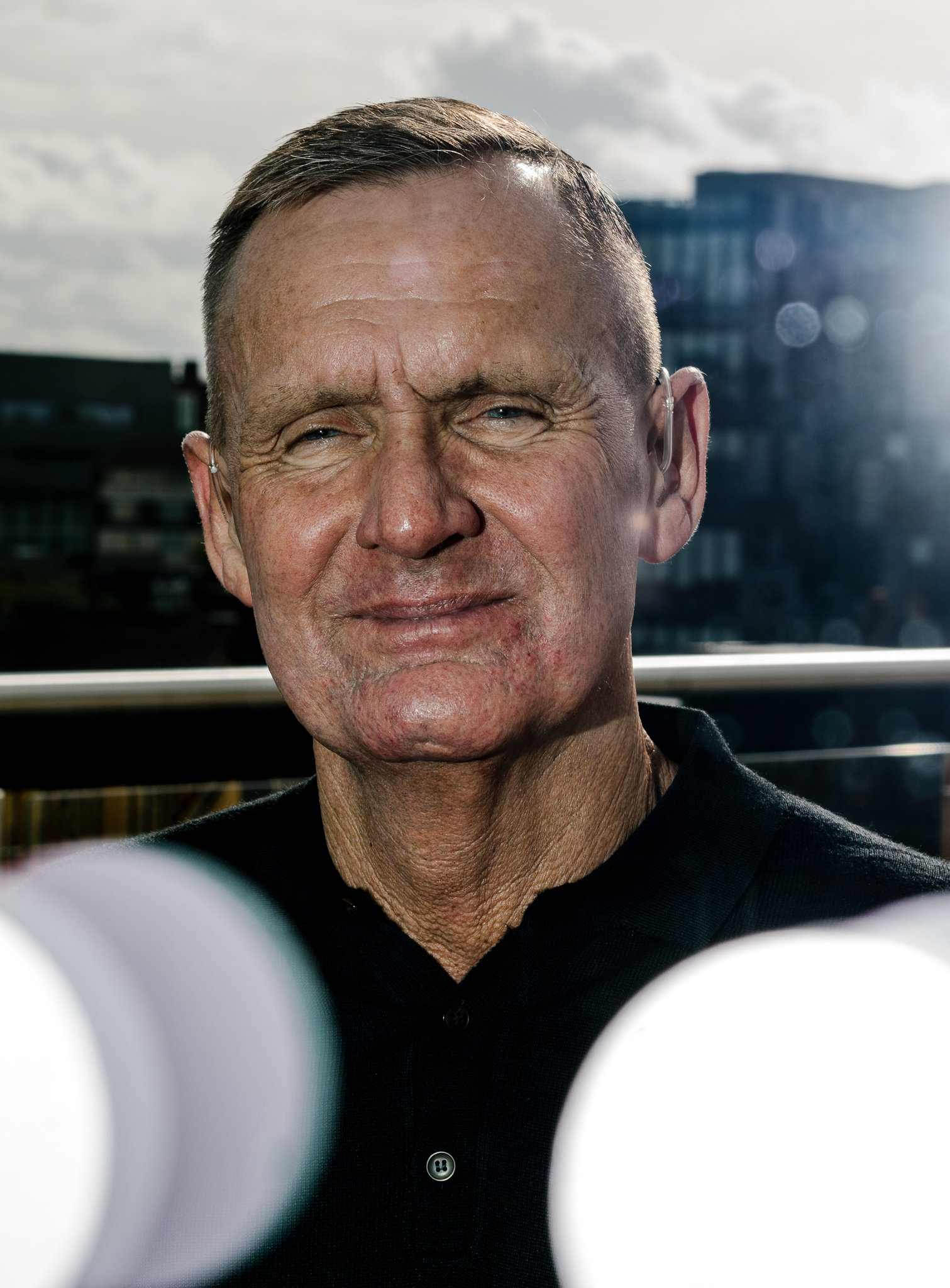 Terry Nelson, the founder of Aqua Running, a company that sells buoyancy suits for training and rehabilitation. Credit Jake Naughton for The New York Times

Terry Nelson, the inventor of the buoyancy suits used by many of the world’s top clubs and teams, found that training in water helped him move forward after his transplants.

LIVERPOOL, England — Whenever one of Real Madrid’s galaxy of stars is injured, one of the first people the club’s medical staff contacts is usually Terry Nelson.

Nelson is many things — inventor and entrepreneur, amputee and erstwhile athlete — but he is not a doctor or a surgeon. Regardless, Real Madrid’s in-house physicians tend to get in touch with him almost as soon as a player is sidelined. Often, they will apprise Nelson of their plans for the player’s rehabilitation. Sometimes they just seek his counsel. He makes an unlikely first port of call for the most powerful club in the world, but then everything about Nelson’s story is unlikely, and it is only getting started.

Nelson, 55, is known to Real Madrid as the creator and designer of what its former manager José Mourinho used to call the club’s “secret weapon,” a buoyancy suit that is used primarily to help injured players train in water, enabling them to build their fitness when they are unable to run normally.

He first sold his suits, made from Lycra, nylon and foam padding, to the club in 2012. After a single demonstration at the club’s training facility at Valdebebas, Real’s medical department ordered 50 on the spot. They now form a core part of Madrid players’ recovery work.

“They use them four or five times a week, with small groups of players,” Nelson said.

The suit, as Nelson explained it, tells the story of his life. After his all-too-brief playing career ended in the early 1980s when he was released out of Liverpool’s youth ranks, he trained to join the British Army’s Parachute Regiment. “The toughest military training in the world,” he called it.

His army physical, however, revealed a blood problem that was eventually traced to kidney failure. Nelson was told that without a transplant, he would have six months to live.

His brother, Dean, donated a kidney to keep him alive. Nelson, determined to repay his brother, set his sights on competing in the 1993 World Transplant Games in Vancouver, British Columbia. “A few weeks before leaving, I broke a metatarsal in my foot,” he said. “They told me I wouldn’t recover in time.” 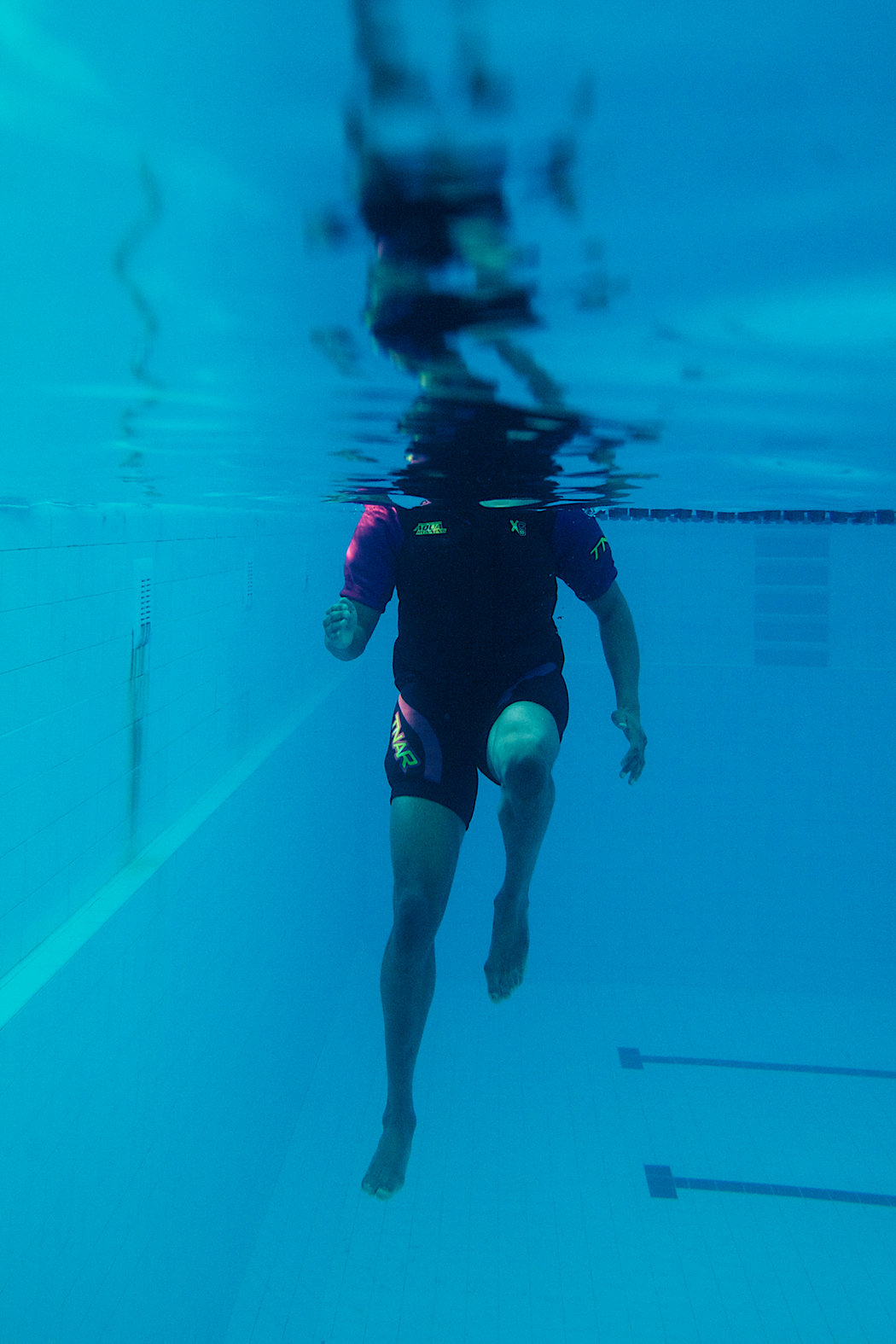 An English soccer player training with the buoyancy suit on. Credit Aqua Running

Unwilling to give up his goal, he started using flotation belts to help him train in a pool. His injury healed. He ran, and won gold.

Nelson’s body, though, started to reject the transplanted kidney. Fluid built up in his lungs. For 12 years, he underwent dialysis.

“Six days a week, attached to a machine for seven or eight hours a day,” he said. His body still bears witness: The veins on his left arm are bulbous, inflated.

He was told not to do any exercise but ignored the advice. “Running in a pool for 20 minutes a day made me feel so much brighter, so much more positive,” he said.

After a second transplant — from his brother’s partner, by pure coincidence a match for his blood type — Nelson set out to turn the pastime that had saved him into something more. “I’d got quite good at it,” he said. “I wanted to make a difference.”

The result, eventually, was the birth of a company: Aqua Running. It not only designed flotation suits, engineered so that wearers could maintain the correct biomechanical position in the water, but also drew up exercise programs to go with them.

“It can work for military, football, athletics and rehabilitation training,” Nelson said, every phase of his life represented. “I was the testing ground for all of it.” A couple of years ago, he lost the lower part of his right leg as a consequence of his lifetime of kidney problems. He was back in the water, in the suit, running, 10 days later.

That he is an evangelist for its benefits, then, is not a surprise.

Plenty in soccer have heard, and heeded, Nelson’s message. His client list is stellar: Cristiano Ronaldo, Gareth Bale and the rest of Real Madrid’s superstars have worn his suits; Diego Maradona signed up while coaching Al Wasl in Dubai, buying the suits not only for himself but also for his extended family, which then included Sergio Agüero.

Sheikh Mansour bin Zayed Al-Nahyan, the owner of Manchester City and a member of Abu Dhabi’s ruling family, saw Nelson present a segment on television while he was in the United Arab Emirates. Impressed, he sent an aide to Nelson that night to buy suits.

“I only had four with me, and they were all prototypes,” Nelson said. 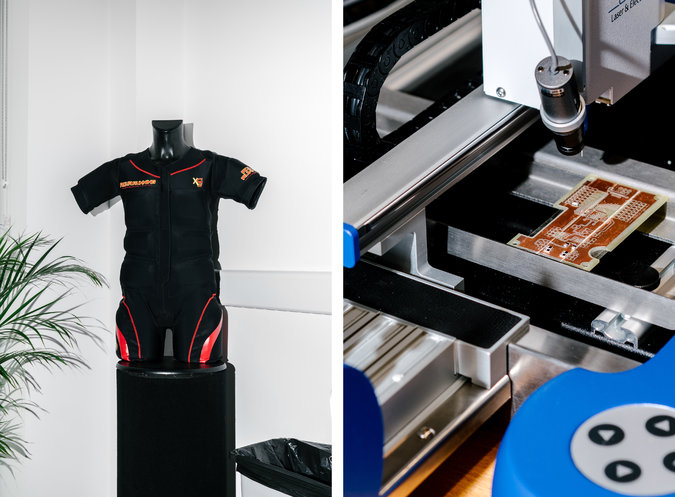 Left, one of Aqua Running’s buoyancy suits on display at its office. Right, a machine used to create the sensors that are a critical part of the next generation of the suits’ technology. Credit Jake Naughton for The New York Times

More significant are the clubs. Though Nelson has had the most success with Madrid — in part, he believes, because the club does not treat its pool water with chlorine, which can irritate the skin of some players and reduce the life of the suits — the European champion is not alone.

Nelson works with a dozen Premier League teams, including Manchester United, Tottenham Hotspur and Liverpool. The day before we met in September, he had taken calls from Crystal Palace and Aston Villa, both wanting to place orders, he said.

He has supplied suits to St. George’s Park, home to England’s national teams, as well as to the country’s rugby team and the British and Irish Lions, a composite touring squad drawing the best rugby players in England, Wales, Scotland and Ireland. The Iranian national team has recently been in touch, while word is spreading outside soccer.

Nelson is intensely proud of his work with children in Spain suffering from cerebral palsy, and he said he was in discussions with the United States Department of Defense to supply suits to veterans recovering from injury.

Nelson is not finished, however. He contends that he has not started to fulfill the potential of the suit; what comes next, he said, will be a giant leap forward that will “revolutionize sports training” altogether.

Aqua Running recently set up shop in Sensor City, a sleek, gold-flecked building on a hill overlooking central Liverpool. It is a joint venture between the city’s two universities, supported by the European Union, with the aim of turning Liverpool into a global hub for sensor technology. It is from here, Nelson is convinced, that he will change the world.

In soccer, as in so much else, data is king. Clubs have long used the GPS-tracking vests made by companies like Stat Sports, based in Northern Ireland, and Catapult, headquartered in Australia, to track their players’ performances in training. The vests collect a host of data points — how fast players are running, how often and at what percentage of their maximum — for team analysts and coaches to review.

Nelson wants to provide the same service, but in the water. “Clubs want to see measurements,” he said. “They want accurate physiological data.” They want to know, for example, about the minute movements in the knee of a player recovering from injury, to identify and head off potential problems.

As ever, Real Madrid is in the vanguard of Nelson’s vision, preparing a long list of requirements for what it believes the suit needs to do.

“They want things like oxygen saturation in the blood, the biomechanics, whether there is a balance between the way the legs move, the amount of time a player can hold their breath while diving to the bottom of the pool,” Nelson said. “And they want it all in real time. They want to be able to stand at the side of the pool with an iPad and see what’s happening.”

It is a considerable technological challenge, requiring a vast array of sensors not only placed but also threaded through the suit. “It will be laced with fibers to track movements, and show how players are moving,” said John Kenny, an electronic innovation technologist based at Sensor City.

“Some of the sensors are simple, but some will be entirely unique,” he added. “It is a case of getting usable data from complex conditions. The water creates a lot of noise, distorting the data, and we need to be able to pick through that.”

Kenny and Nelson were confident it could be done. The effect, as they see it, could be seismic.

“It not only helps players coming back from injury,” Nelson said. “It can be used to extend careers. Older players can do the same fitness work without placing extra strain on their bodies.”

Real Madrid has agreed to host an introductory event for the suit, whenever it is completed, and it has promised Nelson he can use the team’s pool for testing. “They like to be first,” he said. He is certain, though, that they will not be the last.

A version of this article appears in print on November 28, 2017, on Page B11 of the New York edition with the headline: Kidney Transplants Yielded Club’s ‘Secret Weapon’.  The article is also available here